Human, Badger, Lizard: The Polyvagal Theory for Athletes and Coaches

If you’ve ever studied the nervous system, you’ve most likely learned it as a two-fold mechanism - the parasympathetic versus the sympathetic system. This model creates a spectrum from ‘rest and digest’ mode to the ‘fight or flight’ response according to the amount of stress experienced. This theory assumes that we begin in a parasympathetic state and gradually move towards the sympathetic mechanism as stress increases, somewhere along the line crossing a border that puts us in one system or the other. Too much time spent in ‘fight or flight’ mode would trigger a necessity to remove the stressor and return to a state of ‘rest and digest.’

The arch concept, however, paints a different picture of how these two systems function in the body, not as systems at contention with each other, but as antagonistic states in constant checks and balances of one another.

The simple metaphor of an arch is that in order to increase the tension of an arch, you must build at it from both sides. In the muscular system, you’ll notice that the pecs need to engage in a heavy dumbbell row and we know that strong quads mean we also need strong hamstrings. A heavy biceps curl will engage the triceps, too. This balancing act between action and stabilization could be used to describe the nervous system better than the common theory.

In the old model, the act of sex is lost along the spectrum. From an arch perspective, however, we can describe sexual activity more accurately as an increase in tension from either side - building intensity on both on the sympathetic and paraysympathetic side by simultaneously increasing degrees of excitation and relaxation.

According to the arch concept, raising one side of the arch too high will cause a collapse. In humans, too much time spent in a fight or flight response is shown to increase stress-related problems and chronic disease. On the other hand, living only in the comfort of the ‘rest and digest’ system produces it’s own set of issues associated with immobility.

The Polyvagal theory adds another dimension to this new view of the nervous system in which it poses that the nervous system is actually composed of three distinct branches. These three branches help to identify the relationship between human experience and physiological state - our stress, emotions and social behavior have a real, physical impact and we can start to map it.

The newest system, the parasympathetic associated with the ventral vagus nerve, allows us to socialize and maintain rational thinking. The roles connected to the neocortex of the brain involve higher level functions such as sensory perception, spatial reasoning, conscious thought and language, allowing us to function within the world around us and what makes us human. This is also the first part of the brain to shut down under threat.

The second level is the midbrain ‘fight or flight’ sympathetic response and is adaptive to survival, whether as predator or prey, and common to all mammals. These autonomic reactions are often associated to adrenaline response.

The final level, our most ancient system, is that of the parasympathetic system associated with the dorsal vagus nerve. This third degree is our “freeze” system - the act of playing dead. In the world of psychoanalysis this has been important to understanding that this reaction isn’t necessarily a weakness of the mind, rather a static state designed to preserve energy or serve as a defense mechanism.

This triune theory of the brain and branches of the nervous system follows what is called a phylogenetic hierarchy where the oldest systems activate only when the more evolved ones fail, helping us regulate our interaction and response to our environment - a scale from human, to mammal to reptile.

So how is such a deep theory relevant to fitness addicts and coaches? Understanding this hierarchy of mental states can have a significant impact on the effectiveness of training, programming and client-coach relationship.

The first level is what makes us uniquely human and provides relationship and connection. A seat of awareness, it allows us to interact and problem solve with the outside world. The massive success of CrossFit can be largely attributed to this community aspect and the art of connection.

When communication and socialization fail, however, we resort to the second level. In this state, we may look to fight and then resort to escape, or ‘flee.’ Notice an athlete facing challenge in training or competition - if the logic can’t be reasoned, he/she may become angry. If that reaction doesn’t get a reward, the next response may be to retreat. The same hierarchy of response is often seen in children - they don’t get what they want so they get mad, getting mad didn’t work so they cry.

If we can’t escape, we will freeze. This dorsal vagal response, or the “reptilian state,” is often a forceful submission and final tool for survival. A deeply rooted instinct, this reaction allows us to conserve energy by going nowhere and doing nothing. If the athlete can’t reason back to the task or is unwilling to work back into the competitive fight, he/she will quit to preserve what remains of the ego.

When this oldest system fails is the occurrence of death or acceptance of death. The arch concept puts into perspective the idea that this inevitable moment of surrender is ultimately our most human moment. When we accept the sufferings of our task at its worst, we are faced with our deepest question of why we are motivated to do what we do.

Now more practically speaking, the implications of the internal and external torque chains relationship to the nervous system itself are especially valuable to human performance.

The external torque chain, physically marked by the development of the upper traps, latissimus dorsi, lumbar erectors and outside head of the hamstring, are connected to the sympathetic nervous system. These “panic muscles” often develop as compensations for their weaker antagonists in the internal torque chain or turn on to perceived threat. This system is also triggered or associated with mouth or chest breathing (think of yourself running from or fighting an attack). The internal torque chain, including the pecs, teres major, transverse obliques, VMO and inner hamstring, then acts for the parasympathetic system and the two branches of the vagus nerve. A crash within the parasympathetic system can be seen in the fetus position. Nose breathing has been linked to parasympathetic states

The need to fight demands a need for external torque. A max height box jump is best approached with aggression, a sympathetic state. On the other hand, a need for rest or energy conservation necessitates internal torque. An aerobic workout will have a calmer approach. The physical action will correspond to the state. To increase performance without crashing the proverbial arch is a balance between the action of the sympathetic state and the awareness of the parasympathetic.

A session begins in ‘human mode’ - social interaction and communication. Group fitness classes and ‘boot camps’ remain a successful model because of this and training with partners or friends is shown to improve motivation and success.

The training starts in the internal torque chain. The StrongFit openers and mobility exercises help athletes to create body awareness. The primordial act of breathing can be used to increase connection to areas of tension or restriction so nose inhalation can be used as a training or assessment tool for true end range or motion.

After an athlete has gained body awareness and is physically warmed up, the next step is to train mental resilience without triggering a sympathetic response. Nose breathing on concentric action and cyclical sets to failure allow a mental surrender to the dorsal fatal response, or ‘reptile state,’ and recovering back in ‘human mode.’

As weight increases, the ability to stay in internal torque will ultimately fail - there is a need to fight at max load. As the hierarchy follows, this requires that we trigger the sympathetic state with external torque work. This power based state allows awareness to take a back seat, putting less emphasis on technical perfection and more towards action.

It’s important that the sympathetic side of the arch here 4does not crash, meaning that these action-oriented sets should never be taken to failure. Each set should only be performed to its best or else a new cycle is needed to reach the same state.

Though performing sets to muscle failure before heavy loads defies conventional programming logic, a renewed perspective of the nervous system and how to use it to training advantage, means great implication of how we can balance these systems against one another. By understanding the nervous system and how it impacts different muscle groups, or torque chains, these systems can be played against each other for maximal gains in strength.

At the end of a training session is the time to crash. The fight is over and the muscles can shut down. This is the time for mobility ‘mashing’ and stretching to reset and conserve energy for the next task or session. Though pain often shows itself in the external torque chain, stretching always done in the antagonist and this light work in the internal torque chain restores the cycle again.

Understood and followed correctly, the athlete not only increases their ability to act (perform), but their awareness (mobility and proprioception) as well - a balanced arch.

Too many programs fail to address mobility or tension, awareness or intention, and resultantly fail their athletes by collapsing them quickly. Adrenal fatigue is the result of a training program dominated by the sympathetic state. An athlete under these circumstances will not develop to the strength or athleticism that they are capable of and in some cases, cause a state of ‘freeze’ where they may quit physically, mentally, or both. Even the athlete that does come back often does so out of anger (often at themselves for quitting in the first place) and will continue to feed the same problematic cycle of the sympathetic ‘fight’ mode.

Stepping side from jargon and theory, the message is this: our history and experience create us to be who we are, yet our awareness to how we approach and overcome the challenges of our circumstances have far greater impact on what we will become.

Inevitably we will get things wrong and the “arches” we’ve built will collapse - sometimes we forget or neglect or ignore what we truly need and sometimes we just don’t see it. Because of this reality, most people simply avoid building big arches. But out of major crashes people often go through a great phase of awareness and learn their greatest lessons from harsh experience that create growth and opportunity to help others, too.

Eventually, we will all have to accept surrender - to the pursuit of our passions, to the suffering of the task, and even to death itself. Fighting this truth doesn’t avoid the crash and only makes the fight worse. No matter what you’ve been through or what you know, knowing exactly where you are right now and how you will respond is up to you.

Applying StrongFit to your Tribe 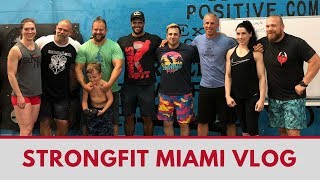 My StrongFit Coaches Journey: The Seminar 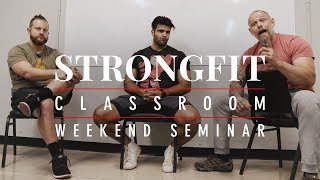 The StrongFit Seminar and System

What is the ‘Arch’ Concept?